If you want to skip the detailed explanations, just run through these steps on your own:

The Orka CLI is the easiest way to get started with Orka. It provides guided, interactive completion of commands and built-in help.

The Orka CLI will be most useful to:

This operation is a one-time effort. With it, you set the Orka service endpoint and your license key. The license key is required for administrative actions.

To get the custom domain for your Orka cluster, if enabled:

Note that you can use http://<orka-IP> and https://<orka-custom-domain> (if enabled) interchangeably in your workflows.

Orka requires you to create a dedicated Orka user for your cluster. This operation also creates a dedicated namespace in the cluster. You are the owner of this namespace. When you create a VM config and/or deploy a VM instance from it, they become associated with your namespace. Other users will not be able to manage your VM configs and your VMs and vice versa. Administrators will be able to list, delete, and purge your VM configs and instances.

When you log in, the Orka CLI caches your token locally and uses it to identify you uniquely with the Orka service endpoint.

The Orka CLI is a powerful tool in the hands of both inexperienced and advanced users. You can work with it one of two ways:

If you're working mostly in interactive mode, keep in mind:

If you're working mostly in direct mode, get to know the -y flag or the --json flag. It lets you bypass any confirmation prompts.

To get help, run:

This command shows the current status of all your nodes. Re-run this command, as you deploy VM instances later on, to keep track of the available resources on your nodes.

A genuine Apple physical host that provides computational resources (RAM and CPU) for your workloads.

A host OS runs on top and you have no direct access (via VNC, SSH, or Screen Sharing) to it.

This command lists the VM configs and VM instances associated with your user.

Do you want to see all VMs on the environment?

Note that this operation requires a valid Orka license key to be set with orka config.

You will likely see a 90GBVenturaSSH.orkasi item. It is a fully installed and configured Apple Silicon-based macOS Ventura image with a 90GB disk size. It also has an admin user configured and SSH and Apple Screen Sharing access enabled.

A disk image that represents VM storage. Base images are bootable disk images that provide the OS, file system, and storage for your VM configs and VMs. Empty images provide added storage or serve as the base image during manual OS installs from ISO.

The Orka CLI prompts you to complete the configuration manually:

The name you specify under VM Name must meet the following requirements: 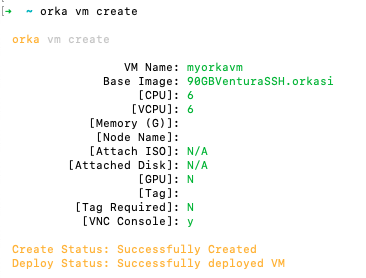 This command creates a VM config and deploys an instance from it.

A template for an Orka virtual machine. You can deploy multiple VM instances (VMs) from a single VM config.
To list all VM configs associated with your user, run orka vm configs.

A deployed instance of a VM config. VMs take up resources from your nodes and require a certain amount of CPU and memory to run.
To deploy more instances of the same config, run orka vm deploy.

orka vm list is a powerful command. It shows a lot of system information for the VM, along with the unique identifier of the instance (ID), its IP, and several connection ports. Note that even though Screenshare and SSH are always listed and configured for every VM, you won't be able to use them unless the respective connection type is enabled in the macOS as well. This behavior is a security limitation of the OS.

In a pool of many VMs, are you looking for that special one?

When you have a lot of VMs, the output of orka vm list might become too crowded to use efficiently. Run orka vm status instead and get the system information for a single VM.

Note that orka vm status is also the only way to get detailed information for scaled VMs.

Are you not working on macOS?

One more thing to remember is that Screen Sharing needs to be already enabled on the macOS. Most of the time, this is not the case (especially on clean OS installs or after an ISO install), and you will need to enable the setting yourself.

The good news is that 90GBVenturaSSH.orkasi is already preconfigured for you, and you can enjoy out-of-the-box Screen Sharing and SSH connectivity.

Are you not using the 90GBVenturaSSH.orkasi image?

If you're using another image as your starting point or if you are installing your OS from ISO, you will likely not have SSH or Screen Sharing enabled by default (even though the respective ports will be mapped by default). In this case, you need to connect to the VM via VNC. You can then enable SSH and Screen Sharing connectivity in the OS.

This action ensures that your VM is running the latest version of the Orka VM Tools. This collection of services lets Orka manage the guest operating system on Apple silicon-based VMs more efficiently and enables key features, such as shared VM storage.

7. Update the base image

Making changes to the configuration or the file system of a running VM does not affect its base image. As soon as you delete the VM, your changes will be lost, and you will need to recreate them manually on other VMs.

To create changes that stick and appear on future deployments, you can commit your changes to the base image, or you can save the changes as a new image.

Commit modifies the original base image of the respective VM instance. With this operation, you apply the current state of a VM instance over the base image of its VM config. This way, newly deployed instances will launch in the same state as your current VM.

For commit to work, the base image must not be in use by any other VM instances (regardless if they were spun from the same VM config or another VM config).

This operation restarts the VM.

Save creates a new base image from the current state of the respective VM instance. To use it, you need to create a new VM config that references the new base image.

This operation restarts the VM.

Return to the command line on your local machine and run:

When prompted, provide the ID of the VM instance. (You can get it from the orka vm list output you ran earlier.

This syntax gives you a taste of running Orka commands in direct mode and bypassing the manual line-by-line input. Note the output of the command. The connection info for your VM shows as soon as the deployment completes.

This section is optional.

When your VM configs and instances have served their purpose, you can remove them. Orka provides two ways to do that: delete and purge.

This operation removes the specified instance(s). You can delete a VM by:

Delete always preserves the original VM config, and you can deploy new VM instances from it.

This operation removes all VM instances and the VM config of that name. You can perform a purge even if there are no VM instances deployed.

You're ready to explore the Orka CLI on your own. You might find the following resources helpful: